Founded in 2007 in Toms River, NJ by Eddie Starnater and Julie Martin, Practical Primitive began with a dream and a mission of providing accessible, affordable and attainable learning in all aspects of primitive skills, wilderness survival, traditional living and self-reliance.
That mission continues to this day. 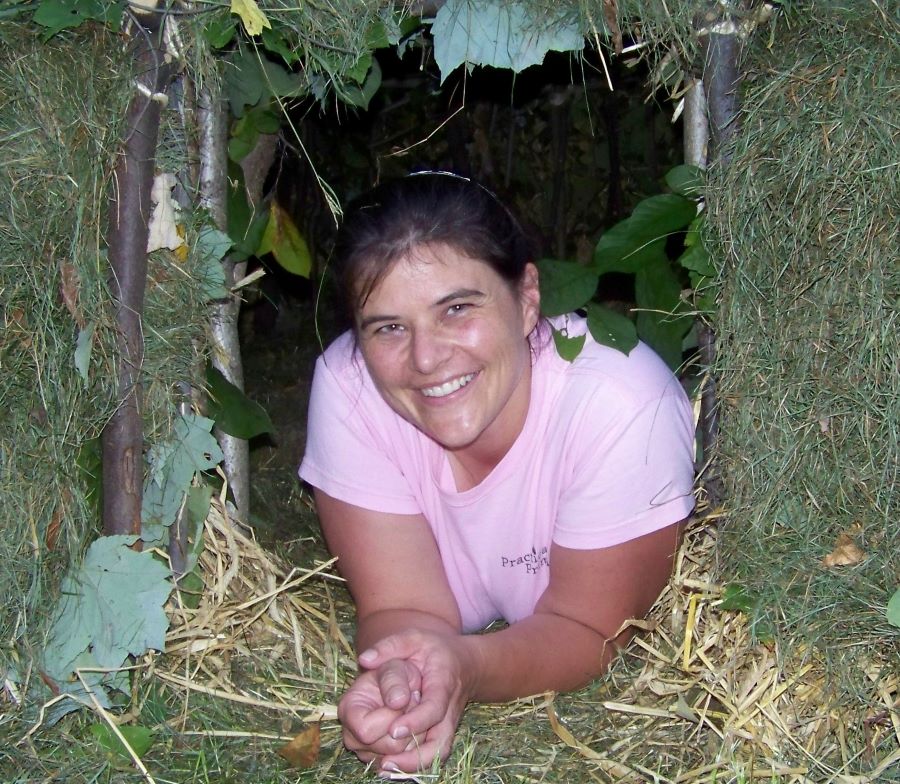 Julie Martin has become one of the most well-respected primitive and traditional living instructors in the United States. Well-known for her ability to to both teach and troubleshoot all types of primitive and survival skills, Julie has brought success to hundreds of students who have struggled with their skills for years before meeting her. She has been practicing Primitive & Survival Skills full time since 2005 and teaching them since 2009. In 2021 she took over sole ownership of the company she co-founded and is excited to be expanding its Vision to reach students across the globe.

Raised on a farm in the Mennonite region of Southern Ontario, where wild foods, organic gardening and traditional farming and food preservation were part of her everyday life, Julie spent her childhood wandering the woods and fields, surrounded by horses, pigs, cows, ducks, dogs and cats on the family farm. She began riding ponies at the age of 4, and has had a dog for a constant companion since before she can even remember.

After college Julie traveled North America and Europe for 15 years while she pursued her career as an actor, singer and writer, and lived in major cities throughout Canada and the United States. In 2004 a serious car accident caused Julie to re-evaluate how she wanted to spend her time on this earth and in this life.

Julie spent some time recovering from her accident and regaining her balance (both literally and figuratively) in the deserts of Utah. Upon learning of Julie’s desire to be able to “Aragorn” a set of tracks they came upon, a friend suggested finding a place to go and learn this ancient skill, so Julie did. After reading a few books and doing a some research on the fledgling new technology known as “the internet”, she came across, and subsequently attended some classes at Tom Brown’s Tracker School.

What had begun as a way of overcoming the trauma from her accident quickly developed into a life-changing passion into which she jumped head-first and never looked back. Julie’s passion for learning, practicing and perfecting her new skills did not go unnoticed. She was offered an internship at Tracker, followed by full-time employment. After spending a year increasing efficiency, improving student relations, revamping Tracker’s office, administration, and School Store, Julie left Tracker behind and, together with Eddie Starnater, founded Practical Primitive in May 2007.

Since then Julie has been the subject of interviews and articles in publications ranging from Wilderness Way to The New York Times. Julie has been featured in multiple podcasts and television segments for local and network news programs, including ABC World News Tonight.

Julie quickly began putting her many years of experience as an actor and writer to use in her new field. She is the author of the most comprehensive book ever published on making fire using the bowdrill. Her book Secrets of Bowdrill Success: Your Comprehensive Guide to the Secrets and Science Behind Rubbing Two Sticks Together has been widely praised and her practical methods of understanding the how and why of the science behind the skill has brought fire-making success to thousands. She is also the co-author of Acorn: Recipes for the Forgotten Food and the Nature Notebook: Your Yearly Observations Journal and co-stars with Eddie Starnater in the highly-rated DVD and online program,  9 Step Knapping: Flintknapping Made Easy. She began training with firearms in 2006 and in 2017 served as co-leader of the first New Jersey chapter of the national organization The Well-Armed Woman, where she helped train and empower women to take charge of their own preparedness and self-protection.

While she has spent over 15 years continually practicing and perfecting all the skills of our ancestors, Julie’s biggest passions have always been fire, flintknapping, and the amazing relationship she has developed with the many members of the Plant Kingdom.

Always curious and forever seeking both knowledge and understanding, Julie has spent years delving deeply into the science behind the skills of our ancestors. Her forthcoming podcast, Survival by the Numbers, will focus on sharing this link between skills and science that shows the amazing genius of our ancient ancestors, and how we can use this knowledge to our advantage to make these skills as easy today as they were 10,000 years ago.

Julie is very excited to have taken full ownership of Practical Primitive as Eddie moves into semi-retirement.

She is continuing to lead the way in this industry by expanding Practical Primitive’s online courses and programs, bringing the skills of our human birthright to everyone who wishes to discover them, anywhere in the world. 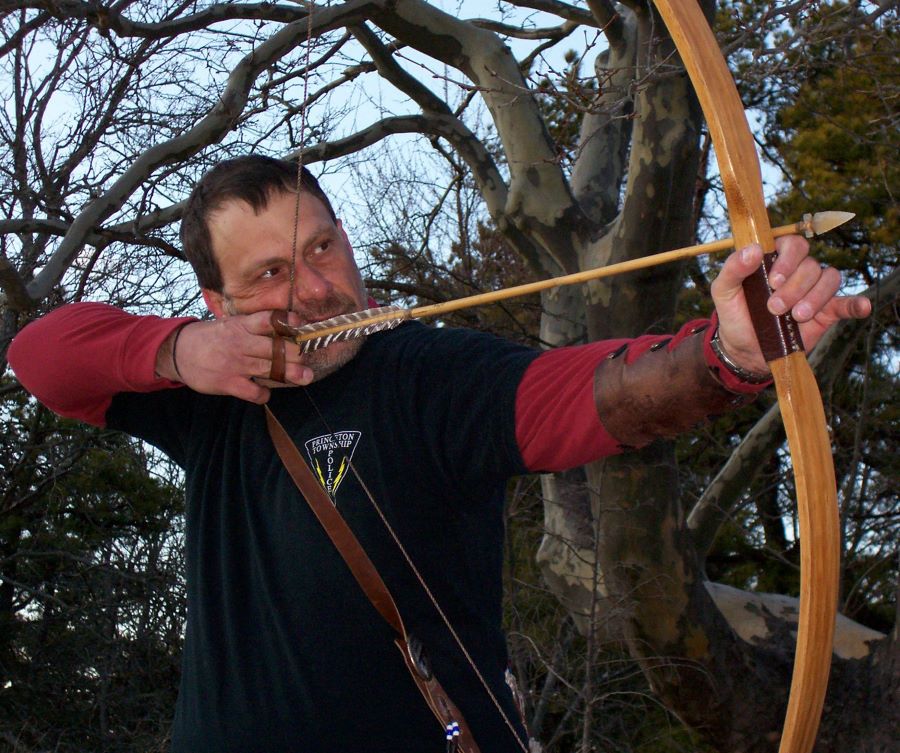 Eddie Starnater is one of the top Primitive and Survival Skills experts in the United States, and has been practicing and perfecting Primitive and Survival skills since childhood. Over the past 50 years Eddie has become a Master Flintknapper, and an expert bowyer, tracker, primitive potter and maker of all types of primitive weaponry. He has spent years living in the woods and off the land, perfecting his wide range of Wilderness Survival skills on countless Survival Outings in many ecosystems around the country, and while living for months at a time in a long-term shelter in the Pine Barrens of New Jersey.

As a teacher and instructor of all aspects of primitive and survival skills, tracking, hunting, fishing, traditional living, self-reliance and awareness for almost 40 years, Eddie has been a major influence on the current generation of primitive skills instructors. The subject of interviews and articles in publications ranging from Wilderness Way to The New York Times, Eddie has been featured in multiple television segments for local and network news programs, including ABC World News Tonight. He was also a consultant on the 2003 feature film,  The Hunted, for which he provided many of the stone tools used by Tommy Lee Jones and Benicio del Toro.

Eddie grew up in Texas where his father, a veterinarian and avid outdoorsman, had him out in the woods almost as soon as he could walk. It was from his Dad that Eddie learned most of his stalking and hunting skills (he harvested his first two deer at the age of 10) along with his love of, and respect for, the wild places of the world and their inhabitants.

In his late teens Eddie discovered bow-hunting, and by his 20’s he had began building his own bows, fashioning his own arrows, and spending his lunch hours out at a nearby archery range where he would shoot up to 100 arrows a day. During the mid-eighties Eddie was competing in Traditional Archery tournaments throughout the United States, where he consistently placed well against some of the top long bow archers in the country.

Soon after discovering bow-building, Eddie came across a book on Flintknapping, and a true passion was ignited. It wasn’t long before he was producing top-quality arrowheads, spear points, jewelry and other eccentric pieces for collections across the world. Over 35 years later flintknapping is still Eddie’s greatest passion among the primitive arts.

A former Hunter Safety Education instructor for the State of Texas, Eddie is an expert marksman. Whether shooting a firearm, longbow, crossbow or atlatl, throwing knives, tomahawks, spikes or screwdrivers, Eddie hits his target.

After 10+ years teaching in Texas, Eddie become an instructor for, then Director of, Tom Brown Jr.’s Tracker School. During his tenure as one of “the finest instructors and Trackers I have ever had the privilege of teaching”, (TB Jr., Case Files of the Tracker), Eddie taught primitive skills, survival, tracking, and nature awareness to tens of thousands of students from across the globe.

By 2006 Eddie had become disillusioned with the huge class sizes, lecture format  and industrialized teaching style of the major schools, that had become more focused on notebook knowledge over the hands-on learning and internalization of the skills to which he had dedicated his life. He made the decision to walk away.

In May 2007 Eddie founded Practical Primitive together with Julie Martin. His unparalleled ability to break a skill down into easily understood and quickly learned principles allowed students to progress leaps and bounds beyond what they may have learned at other schools. His “Beyond Instinctive Shooting” method of teaching archery consistently has students who have never previously shot a bow able to hit aerial and rolling targets after a single morning of instruction. 9 Step Knapping™, Eddie’s breakthrough method of teaching flintknapping, has brand new knappers creating usable bifaces in a single day.

Over the next 13 years their hands-on, small-group workshops provided a unique and unparalleled opportunity for those seeking to learn quality skills from someone who had spent the majority of his life working, learning, and perfecting the Sacred Primitive Arts that have served mankind for millennia.

In 2019 Eddie decided it was time to take a step back. After a 2014 kidney cancer diagnosis and 5 subsequent years of health issues and surgeries, he is healthier than he has been in years and wants to spend some time living life.

Eddie is now enjoying semi-retirement, spending more time in the woods, the garden and just having fun, while acting as Senior Consultant to the company he co-founded.